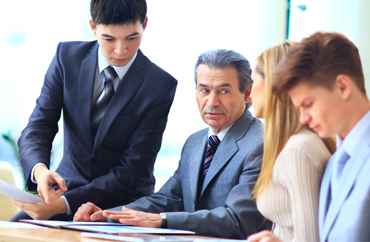 Have you ever left a negotiation with a potential international client or partner and felt like you didn't get what you wanted or expected?

Here are ways to counteract some of the most common techniques:

The Sound of Silence

It's fairly simple; your counterparts simply stop talking. . . for up to three minutes. This amount of silence tends to unnerve Americans and send them into a stream of talking in order to fill the sound gap. Oftentimes Americans will find themselves giving away negotiations concessions just to get the conversation started again.

This technique is common in East Asia, and it has proven effective against the American need to fill the silence. If you've never seen this technique before, you can test it out in your next internal business meeting. It is typically very effective in inducing an American monologue.

Instead, match the silence. Become calm and quiet waiting for the other side to resume their side of the conversation. This will completely neutralize this technique and usually it only needs to be dealt with once.

This is another favorite technique used against Americans. We don't do well with unpredictable behavior and high emotions. Particularly in the Middle East, parts of Africa, and some former Soviet countries, throwing the equivalent of a temper tantrum is a way to gain some concessions in negotiations. This could involve raised voices, pouting and begging.

Americans tend to have two reactions to this drama: (1) walk away from negotiations assuming that their counterpart can't be trusted to control their emotions or anything else, or (2) give in to the emotional display in order to get past it and closer to finishing the deal.

If you are doing business in one of these parts of the world, you should expect this drama. Instead of dreading it, you can even look forward to it. Enjoy the theatrical show because it's for your viewing pleasure! Generally you'll want to stay calm in order to show that the drama isn't generating the intended effect.

Divide the Team and Conquer

Americans are known for their independent thinking, even when serving on a business team. The benefit of everyone having an opinion is that you get a fuller set of options and perspectives to choose from than if everyone has group think. But in international negotiations, this can be a major downfall.

Once the other side realizes that your team is not cohesive, they will cherry pick the ideas from team members that most benefit their side and restate those positions as if they represent your entire negotiations side. It's hard to negotiate against the other side when your side provides them with their best ideas. This happens more often than many Americans realize.

Counter this before negotiations begin. Discuss the negotiation goals, boundaries and especially roles with your whole team. There needs to be a lead negotiator. The lead negotiator should do all of the talking unless deferring to a specific team expert.

Instead of talking out of turn during negotiations, ask to take a break in order to talk as a team. It is vital not to contradict particularly the lead negotiator as it undermines their position and credibility.

There are many other techniques used in international business negotiations, but these three are more commonly used against American companies to gain extra concessions.

Best of success in all of your international business endeavors!

This article was first published in April 2014 and has been updated to include current information, links and formatting.