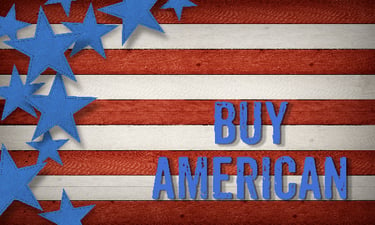 Many international traders were surprised by the Buy American rules proposed by President Biden soon after inauguration—they were expecting the incoming president to have a gentler approach to international trade than his predecessor. (See my previous article Buy American Legislation Importers and Exporters Should Watch.) The January 2021 proclamation offered broad guidelines and few specifics but signaled the direction the administration would take on trade: goods purchased by federal agencies would need to contain less foreign-made content and waivers would be harder to come by.

Six months later, the White House released more specifics in this fact sheet. The proposal requires that goods purchased with taxpayer dollars contain more U.S.-made content—60% as soon as the rules go into effect and 75% by 2029, up from 55%.

What does this mean in a practical sense to the trade community?

The Impact on Price

If you are a first-, second- or third-tier supplier to the U.S. government, whether you make a car, furniture or a paperclip, you will need to have more American-made content in your product in the future to qualify for government contracts. This will likely raise your costs and the price to your customer.

Given limited supplies of some products (computer chips) and critical shortages of key minerals such as titanium (and other products related to defense production), domestic sources may not always be available. This means you may no longer be a competitive bidder in U.S. federal procurement—a market worth more than $500 billion dollars a year, $136 billion of which is spent by the Department of Defense. In addition, $2.59 trillion has been earmarked for supplemental COVID-19 spending.

Say, for example, your company sells one part to a company that makes a radio used by the U.S. military. If the contractor was used to using 55% American-made content and now must increase that to 75%, it may be your part that must now be sourced domestically. If you have trouble finding 55% American-made content for your product, you should be considering how you will be able to meet a 75% content requirement.

The Impact on Waivers

In the past, many government procurement officials realized that meeting their mission-critical specifications and timelines was more important than cost. They supported a system of waivers that allowed exceptions to Buy American rules in critical situations. The proposed new rules may take away some of this flexibility.

“In April, the President opened his new Made in America Office. The Office reviews proposed waivers of Made-in-America laws and helps agencies use taxpayer dollars to support U.S. manufacturing,” the fact sheet explains.

The main purpose of this office will be to reduce the number of waivers given and make it harder for importers to sell their products to the U.S. government.

The Cost of Compliance

Another concern of the new Biden plan is the increased cost of compliance and paperwork. From the White House: “Currently, contractors only tell the government if they meet the content threshold rather than reporting the total domestic content in their products. The NPRM [Notice of Proposed Rulemaking] proposes to establish a reporting requirement for critical products. The new reporting requirement would bolster compliance with the Buy American Act and improve data on the actual U.S. content of goods purchased.”

How Will Other Countries Respond?

Finally, how will rule changes affect those who export and sell to foreign governments, or contractors who supply foreign governments, including projects such as a new Mexican airport? They are likely to see retaliatory regulations from other countries, designed to pressure the U.S. to change rules.

All of this equates to a continued protectionist trade environment, in some ways more so than under President Trump, who implemented what he saw as short-term tariff measures to respond to unfair Chinese trade practices that were widely recognized. Buy American is not in response to unfair trade practices but instead a reaction to the generic principles of free trade and comparative advantage. Each country produces the best and cheapest products it can, and it is advantageous for other countries to buy these products.

Here is one example from the White House of how Buy American is already being implemented, to the detriment of importers:

The Department of Energy acquired new electric vehicles for its fleet, all of which were manufactured in the US or have batteries that were produced at US facilities. The Department will also purchase steel products, advanced computing, and hazardous materials isolation equipment manufactured in Texas, Iowa, Idaho, Louisiana, South Carolina, Ohio, Connecticut and Wisconsin.

I have written several blogs on Buy American policies because I am worried about the implications for the future of free trade and think our readers should be, too. If this is likely to impact your business, please send me details at glick@butzel.com.