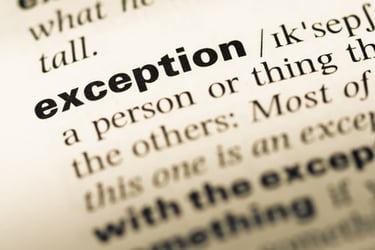 What Is an Export License Exception?

Each of these is defined by a three-letter abbreviation or acronym. A description of each of the license exception types, as well as information regarding license exceptions more generally, are found in the Code of Federal Regulations 15 CFR Part 740. 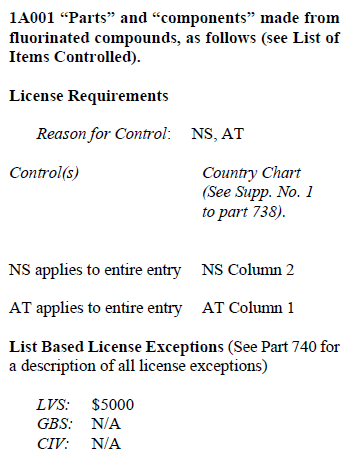 We will use the same example as in my last blog post: exporting fluorinated parts and components to Algeria. These items are classified with an Export Control Classification Number (ECCN) of 1A001 in the Commerce Control List (CCL). Under the heading, you can see that two license exceptions are listed: LVS and GBS.

The total value of exports per calendar year to the same ultimate or intermediate consignee of items classified under a single ECCN may not exceed 12 times the LVS value limit for that ECCN.

Under ECCN 1A001, GBS is marked as “N/A” which stands for “Not Applicable.” This means that license exception GBS is not available for orders under heading 1A001.

When filing through the Automated Export System (AES), you will have to enter the license exception code you are using. The Shipping Solutions export software allows you to do this by using the same information you enter for your export documents, saving time and making your documentation and compliance process more accurate by eliminating redundant data entry.

It is important to read all of the information listed under the heading. For our example using ECCN 1A001, we can see that if the items are “specially designed” or modified for missiles or for items on the U.S. Munitions List (USML), then these items are subject to the International Traffic in Arms Regulations (ITAR) rather than the Export Administration Regulations (EAR).

LVS and GBS are the most common license exceptions, but you may come across others such as STA (Strategic Trade Authorization), TSR (Technology and Software Under Restriction), APP (Computers) and ENC (Encryption Commodities, Software, and Technology.) Some, such as TSR, will usually say either “Yes” or “N/A” next to the license exception acronym listed under a heading for a particular type of product.

Sometimes it will include a condition. For example, it may say something like “Yes, except unavailable for MT,” which would mean that this license exception is unavailable when you require an export license for reason MT (Missile Tech). Another example would be under ECCN 3A001 where it says “CIV: Yes for 3A001.a.3, a.7, and a.11,” which means that this license exception specifically applies only to those subheadings.

For a list of all the export license exception codes and what they mean, see our article, What You Need to Know about Export License Exceptions.

My introduction to export regulations and the export license determination process began when I attended the Complying with U.S. Export Controls seminar sponsored by the Bureau of Industry and Security (BIS) and the Minnesota Trade Office. I would highly recommend the seminar to everyone regularly involved in exporting. You'll find the latest seminar schedule on the BIS website.

This article was first published in September 2016 and has been updated to include current information, links and formatting.