What Is a Bill of Lading: 3 Things You Need to Know 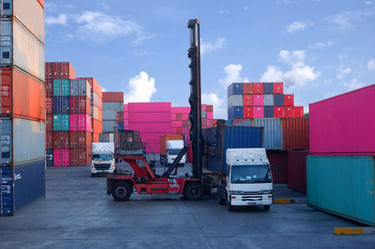 Are you a new exporter looking for a primer on bills of lading? Or maybe you’re at the opposite end of the spectrum—a seasoned professional seeking a reference or training tool.

Either way, this article is for you! We’ll explain, in simple terms, three things you need to know about the bill of lading form.

1. What Is the Definition of a Bill of Lading?

A bill of lading is a contract between you, the owner of the goods, and the carrier stating what goods you’re shipping, where the shipment is coming from and where it’s headed. It also serves as a receipt issued by the carrier once your shipment is picked up.

A bill of lading (or a freight bill of lading or a waybill) can also serve as a document of title, which allows the person holding it to claim possession of your shipment. There are several specific bills of lading, which we’ll discuss in detail below.

2. When and Where Do I Use a Specific Bill of Lading Form?

Specific bills of lading forms should be used based on which method you’re using to transport goods. Here are a few common examples:

This bill of lading is typically used to ship goods to a customer who has already paid for them.

“To Order” Bill of Lading

To order bills of lading are typically negotiable documents and allow the transfer of ownership of the goods outlined in the bill of lading to another party upon endorsement by the party listed as the ultimate consignee on the document. Often under the terms of a letter of credit, the bill of lading is consigned "to order" or "to order of [named] bank."

Inland bills of lading are often the first transportation document issued for the international shipment. They are used for cargo shipments by rail or road, but not sea. Download a free inland bill of lading form.

You’ll use this type when you combine shipping methods. For example, goods flown from Omaha, Nebraska, to New York City and then shipped to Europe qualify for a multimodal bill of lading.

There are three significant reasons to use a bill of lading form:

The key is correctly completing the document; a mistake could delay a shipment or, worse yet, delay payment for a shipment.

In addition, consider this: More than 10,000 shipping containers are lost annually. Without a correctly completed bill of lading, that could mean a major headache trying to get compensated for your loss.

This article was originally published in May 2014. It has been updated to include current information, links and formatting.