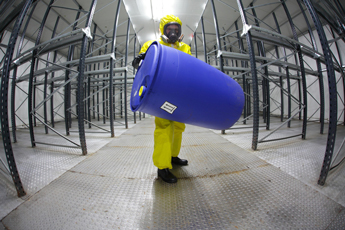 As a hazardous materials trainer and consultant for nearly 30 years, I am always amazed by the complacency some companies that ship hazardous materials have towards the gravity of the hazmat regulations. At the risk of sounding like an alarmist, if not done properly, a routine shipment can cost a shipper an awful lot of money.

Time and time again, usually after the fact, the guilty shipper will say things like: "We only ship this stuff occasionally." Are we supposed to gather it's only hazardous sometimes? Or, "We've always ship it this way and never had a problem," assuming two wrongs make a right.

When it comes to compliance, if something isn't right, it's wrong, but for some reason there are shippers who benignly ship stuff that they have little or no knowledge of the consequences if the consignment is shipped incorrectly. The seriousness of shipping hazardous materials incorrectly has just reached a new level, which, in my mind, is long overdue. Last week the Department of Transportation (DOT) through its regulatory branch, Pipeline and Hazardous Materials Safety Administration (PHMSA), passed a final rule and substantially increased the amount of fines for non-compliance.

Normal conditions for transport should always be taken into consideration. All shippers who offer packages containing liquids must be trained to understand and apply the stringent standards for vibration, pressure and temperature because of the higher risk and possible dire consequences. This is especially critical when it comes to shipments by air.

Civil penalties are assessed for knowingly violating a hazardous material transportation law or a regulation, order, special permit, or approval issued under that law. The following updated civil penalties apply to violations occurring on or after October 1, 2012:

"Hazmat safety regulations exist to keep people, property and the environment safe, and it is our responsibility to enforce these laws," said PHMSA administrator Cynthia Quarterman. "When someone breaks the rules, it puts us all at risk. The consequences for doing so should be substantial enough to discourage misconduct."

Here are a couple of recent examples:

Amazon improperly shipped a package containing flammable liquid adhesive by air via FedEx. FedEx employees discovered a gallon container of the adhesive that was leaking. The adhesive is classified as a hazardous material under the DOT regulations. Amazon offered the shipment without the requisite shipping papers or emergency response information, and did not mark, label or properly package the shipment. Amazon also failed to properly train its employees in preparing hazmat packages for shipment by air.

The Federal Aviation Administration (FAA) alleges that on two separate FedEx cargo flights, Alfa Chemistry shipped undeclared hazardous material that DOT regulations prohibit from being transported on passenger and cargo aircraft. The company allegedly shipped approximately one pint of Acrolein on one shipment and three additional pints on another. Acrolein can become explosive when combined with air and is classified as a toxic/poisonous material and flammable liquid under DOT Hazardous Materials Regulations.

The FAA and FedEx personnel tried to inspect the second shipment of Acrolein at the FedEx sort facility in Peabody, Massachusetts, after it began emitting a strong, pungent odor. However, they were unable to examine it because they began to experience coughing fits and extreme eye, nose and throat irritation due to the severity of the odor and vapors coming from the shipment. A FedEx employee had to put on a protective suit to inspect the shipment.

Here is an updated list of frequently cited violations as published in the Federal Register. These are baseline amount and will vary according to the nature, circumstances, extent and gravity of a violation; the degree of culpability and compliance history of the respondent; the financial impact of the penalty on the respondent; and other matters as justice requires. PHMSA can adjust the baseline amount in light of the specific facts and circumstances of each case.

This last paragraph really sums up the point I'm trying to make. When it comes to shipping hazardous materials, the U.S. Department of Transportation is making the penalties higher for non-compliance. The consequences of not doing your due diligence, which starts with properly training hazmat employees, is leaving your company exposed to serious fines. My suggestion is simple. Get all personnel who are involved in shipping hazardous materials properly and thoroughly trained either in-house or by an experienced and reputable organization.