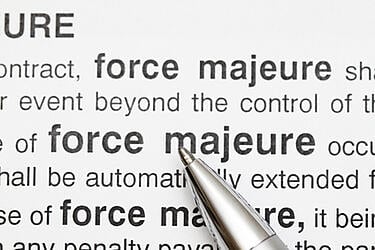 In most standard sales of goods contracts, roughly the last third of the agreement consists of the most standard, little-noticed clauses known as boilerplate. These include clauses on subjects such as Assignment, Waiver, Notices and the like. In most negotiations, the parties spend little or no time focusing on or re-writing these clauses.

One of the typical boilerplate clauses is what is known as a force majeure clause. For sellers of goods, it pays to take some time to focus on this clause.

Force majeure is a French phrase meaning superior force or overwhelming circumstances. In common law countries like England and the U.S., it is more often referred to as Acts of God. I was once negotiating a joint venture agreement with some Bulgarians who objected to the use of the phrase, Acts of God, in the draft since, as they pointed out, they were atheists. So we just changed it to force majeure. Legally, it’s the same thing.

A typical list of force majeure events would include war, riots, fire, flood, hurricane, typhoon, earthquake, lightning, explosion, strikes, lockouts, slowdowns, prolonged shortage of energy supplies, and acts of state or governmental action prohibiting or impeding any party from performing its respective obligations under the contract. So if, for example, a hurricane occurred that shut down a port, the seller planning to ship its goods through that port would not be liable for late delivery of the goods.

Force majeure is defined generally as any event or condition not existing as of the date of signature of the contract, not reasonably foreseeable as of such date, and not reasonably within the control of either party, which prevents, in whole or in significant part, the performance by one of the parties of its contractual obligations or which renders the performance of such obligations so difficult or costly as to make such performance commercially unreasonable.

Since the payment of money by the buyer is almost never excused by the occurrence of force majeure events, it is the seller who should be most interested in having a good force majeure clause.

Some buyers will argue that strikes and lockouts and other labor disputes are not entirely unforeseeable or may be within the control of the seller, so that is often an area for negotiation.

This article was first published in July 2007 and has been updated to include current information, links and formatting.