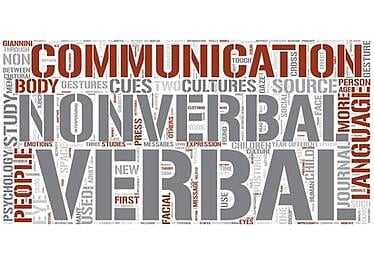 If your words relay only part of your message, various other sounds and your entire body express the rest. A good synchronization of speech and movement, used properly in the cultural context, will give any speaker enhanced credibility.

Paralanguage refers to the sound, noise, pause, speech rate, pitch of voice, volume, tone, inflection, modulation, accent and accentuation, as well as silence, suspense and pause a person may use to enhance and direct his communication. The simple expression, “Oh, yes,” for example, may be uttered to express a whole array of attitudes. Paralanguage can add a great deal of feelings and credibility to the otherwise dry verbal expression.

Body language refers to facial expressions, gestures, position, and movement and their relation to communication. They differ greatly from culture to culture, and there is no dictionary to translate them.

American society is rather horizontal. People are presumed equal and are treated democratically. They are taught from childhood to stand up for their beliefs, to look others in the eyes, to have the courage to defend their positions, and to say yes or no.

Most of the countries of the world are vertically stratified. An indiscriminate American could easily be construed as rude and may block communication.

Facial expressions such as smiles, frowns, winking and yawns can have enormous consequences. Eye contact alone can carry and miscarry a lot if information and is more typical of the Western world. Staring at strangers is impolite. Extended eye contact is rude. Avoiding eye contact can be a sign of insecurity. Shifty eyes could diminish the credibility of one’s words or could be interpreted as hiding something.

In many countries such as Japan, for example, younger people do not stare at an older person. If they do so, they must be the first to lower their eyes. While attending a lecture, it is all right for the students to follow the teacher, but it is not acceptable for a lecturer to look fixedly at the same person throughout the presentation.

Facial expressions also vary with the culture. Americans smile more often than the more cynical Europeans. After all, what’s there to smile about after two devastating wars? Buddhists, trained to resign earthy pleasures, smile even less than Europeans. The Japanese, who are trained to be stoic and to hide their anguish, might even smile in situations in which an American will cry.

When visiting another culture, one of the important elements of culture shock is the inability to read faces. People appear to smile permanently in a phony way or to wear an unexplainable straight face. Under such conditions, a simple eyebrow flash or an innocent but prolonged stare may send an unintended message.

On other occasions, some Americans, conditioned by U.S. technology and high standard of living, may have a patronizing look or a condescending smile, which will be equally rejected. Diffusing the tension caused by any one of these expressions will not be easy.