23 Crazy U.S. Trade Facts That You Won’t Believe Are Real

The last few years have been filled with highs and lows for U.S. businesses involved in international trade. Imports and exports have soared, along with the trade deficit, while relationships with some top U.S. trade partners have strained.

Since we last took a look back at the year in international trade (U.S. Trade Hits Record Levels Amid Supply Chain Woes and Global Uncertainty) things haven’t become any more predictable. Now that we’re more than halfway through 2022, let’s take a look back at where we started the year and where things seem to be headed.

During World Trade Month, we put together 31 interesting facts about world trade. These are some of the most noteworthy of those facts, along with new numbers that represent how things have evolved through the first half of the year.

6. The price of United States exports rose 18.2% from November 2020 to November 2021, the largest increase on record at the time. Agricultural export prices in particular jumped 21.4% during that time period, a trend that has continued into 2022.

7. From May 2021 to May 2022, the export price index increased 18.9%, the largest over-the-year rise since 12-month percent changes were first published in September 1984, according to the U.S. Bureau of Labor Statistics.

8. Supply chain snarls are partly to blame for rising prices, and have led some companies to make changes this year. Bloomberg reports that the construction of new manufacturing facilities in the U.S. has soared 116% over the past year, dwarfing the 10% gain on all building projects combined, according to Dodge Construction Network. Some businesses are reassessing where they manufacture goods. Not all of the new construction is reshoring, but some is as companies look to shorten supply chains to protect against disruptions. 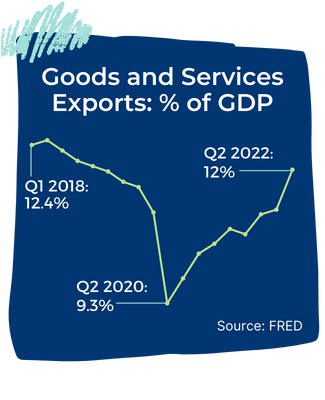 12. Global trade in services reached $6 trillion in 2021, slightly below pre-pandemic levels. Moving into 2022, services trade has also been affected by the conflict in Ukraine, including in the transport sector, which covers container shipping and passenger air transport.

does not trade with.)

15. On January 15, 2020, China signed a Phase One trade deal with the United States, agreeing to increase American export purchases by $200 billion above 2017 levels. Through October 2021, China only reached 60% of that stated goal, not enough to reach its import levels from before the trade war

16. Manufactured exports to China from January 20 - October 21 were $112.9 billion USD, out of a total $210.7 billion USD purchase commitment. Aircrafts and automotive products were below target, but Covid-related products and semiconductor equipment exceeded target purchase levels.

18. Chinese energy purchases from the United States reached $21.6 billion out of a $67.7 billion commitment. Natural gas exports to China exceeded Phase 1 commitments, but coal, crude and refined products were all below target.

19. Section 301 tariffs imposed on Chinese goods imported into the U.S. served as leverage for the Trump administration to sign the Phase One trade agreement. The U.S. is now conducting a four-year review of these tariffs. Experts expect President Biden to lift or reduce tariffs on some of the included imports, though likely only a small fraction.

Special thanks to Helen Mann. Some of these facts were compiled through her World Trade Month reporting.