Export Compliance: Using the Proper Value on a Commercial Invoice 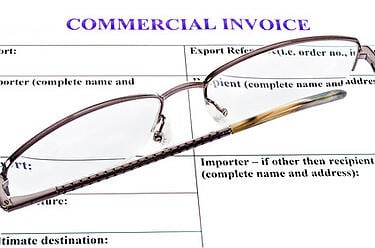 Whenever you work on an export transaction, there are dozens of steps you must follow to successfully complete the process. One of these steps is issuing a commercial invoice. That is true whether your firm sells hundreds, thousands or millions of dollars worth of merchandise.

Occasionally, you may have a customer who requests that you ignore export compliance regulations and alter the invoice value to allow them to save money on import duties.

For example, your customer may ask:

These are just three real examples of comments and suggestions that I’ve heard a buyer make to a seller to get a lower than actual value on the commercial invoice. Sometimes the value adjustment is minor—a few dollars. In other cases the adjusted value is major—a few thousand dollars.

The True Cost of Misstating the Value of Your Exports

If you adjust the value of your invoice by a few dollars to help out the customer, you may wonder who, if anyone, really cares. Here are at least five agencies that do care:

No matter what the value adjustment is, don’t be customer friendly in this case and comply. At best, your compliance can cost you and your company your reputation. At worst, your adjustment can lead to fines and penalties.

A Case of Wire Fraud

In a case several years ago, Advanced Computer Link, Inc. (ACL), a San Jose exporter of computer components, was sentenced and ordered to pay a fine by United States District Judge Ronald M. Whyte in San Jose, following entry of its guilty plea to wire fraud, a violation of Title 18, United States Code, Section 1343. ACL also agreed not to contest the forfeiture of seized funds.

In entering the guilty plea, ACL admitted its involvement in a "double invoicing scheme" in which it prepared invoices for computer equipment exported to companies in the United Kingdom and Ireland listing a fraudulently low price. This invoice was presented by British and Irish purchasing companies to customs officials in those countries to be used to compute Value Added Tax (VAT) owed on the importation of those products, thereby allowing the purchasing companies to defraud the British and Irish governments of tax due and owing on merchandise imported from ACL.

Once VAT had been assessed, ACL would send a second invoice to the purchasing British and Irish companies reflecting the true value of the goods, and thereby receive the full market price of the merchandise sold. ACL admitted that its involvement in the scheme continued for approximately a year.

In entering its guilty plea, ACL admitted preparing and transmitting by fax an invoice that fraudulently represented the price of computer components exported to ZTR, an Irish company, as $892.50 for use in assessment of VAT tax owed on those components. That same day, ACL admitted to faxing a second invoice to ZTR reflecting the true value of the components sold as $89,250.

Following its guilty plea, the Judge ordered ACL pay a fine of $140,000. The judge also ordered ACL comply with the terms of the plea agreement, which requires it to abandon all claims to $1,100,000 of a total of $2,246,830 seized from accounts held by ACL as a result of the execution of seizure warrants obtained by the U.S. during the investigation of alleged criminal conduct by ACL. In addition, ACL told the court it intended to cease all business operations.

This post was originally published in April 2002 and has been updated to include current information, links and formatting.