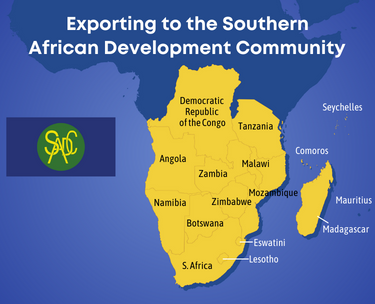 The Southern Africa Development Community (SADC) is an intergovernmental organization striving to grow regional socioeconomic cooperation and enhance political and security cooperation among its 16 members. The SADC has had a free trade agreement since 2000 and seeks to create a customs union. Four member states in particular—South Africa, Tanzania, Mozambique and Angola—deserve consideration for the varied opportunities they present to American exporters and companies seeking to diversify their direct investments. Here’s a closer look at the four in alphabetical order.

With a population of approximately 33 million people in a landmass twice the size of Texas, Angola is the third largest economy in Sub-Saharan Africa. Portuguese is the official language, and the economy is one of the fastest-growing in the world. According to the U.S. Commercial Service Country Commercial Guide (CCG), the leading sectors for U.S. exports and investment are: oil and gas; energy; agricultural products and equipment; transportation (aviation and rail); health care (training, infrastructure, equipment and devices); and marine technologies (fisheries and sea ports).

Like Angola, Portuguese is the official language; however, other languages are also spoken in this country of approximately 30 million people. According to the CCG, the leading sectors for U.S. exports and investment are: agribusiness; design and construction; power generation, transmission and distribution; oil and gas; and transportation.

A nation of nearly 60 million people, South Africa’s economy is the second largest in Africa and the most industrialized, technologically advanced and diversified economy in Africa overall. According to the CCG, the leading sectors for U.S. exports and investment are: energy; ports and marine; environmental technology; rail infrastructure; education and training; agricultural equipment; mining equipment; agribusiness; health care (medical devices and pharmaceuticals); automotive parts and components (including aftermarket); green building technologies; information technology; travel and tourism; education; and franchising.

A large country with nearly 64 million people, the official languages are Swahili and English. According to the CCG, the leading sectors for U.S. exports and investment are: health care (training, infrastructure, pharmaceuticals, lab equipment); agriculture and agricultural processing; energy; mining; manufacturing; and construction.

Let’s be candid: These are not easy markets compared to many others. Still, exporters should keep an open mind as they increase the number of countries in which they conduct business, even when some of the markets might appear counterintuitive. Many small and medium-sized exporters have limited experience and knowledge of the Angola, Mozambique and Tanzania markets and a little more experience with South Africa. However, with patience, thorough long-term planning, and understanding and navigating through the challenges (roads and ports, corruption), exporters have an opportunity to develop relationships, build market share (while their competitors ignore these countries) and reap the rewards.

Looking for other markets for your exports? Read my other articles: