William Augello | November 7, 2004
Print this article:
Shipping goods in ocean vessels invokes special problems for importers and exporters that must be addressed through education and training in transportation laws. Failure to understand the intricate terms and conditions of ocean bills of lading and tariffs can result in unrecoverable losses and unanticipated transportation costs. One of the most common causes of adverse ocean shipping experience is when a cargo owner experiences a loss, damage and delay to its cargo. 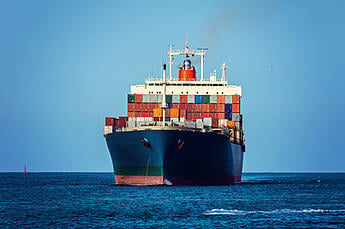 The liability regime governing the shipping of cargo in ocean vessels contains several troublesome features that could result in a cargo owner’s inability to recover for the full amount of a loss, and in some cases, not recover any amount from the carrier.Shipping goods in ocean vessels invokes special problems for importers and exporters that must be addressed through education and training in transportation laws. Failure to understand the intricate terms and conditions of ocean bills of lading and tariffs can result in unrecoverable losses and unanticipated transportation costs. One of the most common causes of adverse ocean shipping experience is when a cargo owner experiences a loss, damage and delay to its cargo.

The first problem is the defense in the Carriage of Goods by Sea Act (COGSA) that provides that if the loss resulted from the ocean carrier’s “negligent navigation or mismanagement of the ship,” the carrier is not liable for the loss! This unconscionable defense is a carry-over from the days of the wooden sailing vessels, when the risk of voyages into unchartered waters and distant undiscovered lands was so great that the ship owners and the cargo owners entered into joint ventures and held each other harmless for any loss of either the cargo or the ship. Eventually, the “negligent navigation” defense was incorporated into the law of the sea, and adopted in 1936 by the United States in the form of COGSA.

This antiquated liability rule is still in effect today despite the advances in technology experienced in navigational aids, vessel construction and global communications. There simply is no justification for the continuation of this defense in the current environment, but it continues to plague cargo owners nevertheless. (For a summary of the negligent acts and omissions that have resulted in ocean carriers’ successful defenses to claims, see Appendix 21 in Transportation, Logistics and the Law, Second Edition)

The second problem is that ocean carriers’ liability is limited to $500 per package, or if not shipped in packages, $500 per customary shipping unit (one truck, one machine, etc.). If a cargo owner wants to be covered for the full value of a shipment, it is incumbent on the shipper to accurately describe on the ocean carrier’s bill of lading the number of packages in the shipment. In doing so, the shipper must state the smallest unit of packaging being used, such as 900 cartons of shoes; 11,000 bags of flour; 400 barrels of oil, etc. Each package will then be covered by the carrier for its value up to $500 per package.

This sounds simple, but the law books are full of court cases where the ocean carrier attempted to limit its liability to $500 for the entire 40-foot container, or to $500 per pallet, despite the shipper’s intent to declare the smallest unit as the “Package.” This practice appears to be a time-honored attempt by ocean carriers to limit their liability to the lowest amount possible under any plausible theory or to completely evade liability for their negligence.

To illustrate why cargo owners must become more sophisticated in their preparation of shipping documents before, during and after shipping, consider the Groupe Chegaray/ v. De Chalus v. P&O Containers, 251 F. 3d 1359 (11th Cir. 2001) case decided in 2001, wherein the Eleventh Circuit ruled that where the carrier makes a unilateral change in the shipper’s pro-forma bill of lading description of the cargo, and the shipper accepts the carrier’s final bill of lading without objection, the shipper is bound by it, even when the carrier’s bill of lading was issued after the vessel had sailed.

In that case, the shipper’s freight forwarder had originally prepared a pro forma bill of lading stating “42 pallets STC [said to contain] 2268 cartons + 2 cartons cosmetics.” The shipper’s and its freight forwarder’s obvious intent in stating the total number of cartons was to declare each carton as a package with a maximum value of $500 per carton.

However, the ocean carrier issued its own bill of lading, changing the language on the pro forma bill to read “42 packages STC 2268 Cartons + 2 Cartons.” The court limited the carrier’s liability to $500 times 44 packages (42 pallets + 2 cartons, or $22,000), rather than to $500 times 2270 cartons, or $505,190.40. The court’s reasoning was that the shipper did not complain when the carrier changed the bill of lading description. Therefore it was deemed to be both parties’ intent that each pallet be deemed to be a package!

Why would a cargo owner knowingly or intentionally agree to limit the carrier’s liability to $500 for the whole pallet when the value of all the cartons on each pallet was substantially greater? There was no difference in the rate on the shipment. There was no other reason for doing so, but the court penalized the cargo owner for not complaining about the carrier’s unilateral act of changing the description submitted by the freight forwarder, an act that was clearly in the ocean carrier’s self-interest.

In light of that shocking decision by a U.S. Circuit Court of Appeals, it would appear that shippers and their forwarders must now carefully review bills of lading when they are received from the carrier, match them against the forwarder’s pro-forma bill of lading and/or the cargo owner’s shipping instructions, and immediately notify the carrier if the description varies from the shipper’s description in a manner that will lessen the carrier’s liability. This practice should be followed even when the ocean carrier’s bill of lading is received after the ship leaves port.

In another case where containers fell overboard due to improper storage (Fishman & Tobin, Inc. v .Tropical Shipping & Construction Co. Ltd., 240 F. 3d 956, [11th Cir. 2001]), the bill of lading read “1 X 40’ STC 39 Big Pack containing 27,908 units boys’ pants.” In the clothing trade, the term “Big Pack” meant “bundles.” The carrier’s liability was limited to “39 bundles of pants” (“big packs”) although each bundle contained dozens of pants totaling 2,325 dozen pants. The Court interpreted each bundle as a package at $500 per bundle and awarded only $19,500 instead of the value of 27,908 pants. Nowhere did the bill of lading state the number of dozens of pants.

In a second circuit case, a shipper contracted with a carrier to transport a shipment of garments in a specially equipped container from El Salvador to Miami (American Home Assurance v. Crowley Ambassador, 2003 WL 328301, 2003 U.S. Dist. LEXIS 2072 [S.D.N.Y. 2003]). The garments were hijacked before being loaded onto the ocean carrier. By the bill of lading terms, COGSA was extended to apply to the period before and after loading.

The court held that since the bill of lading listed the container as the package and nothing else was provided regarding a description of the garments in the rack, the shipper was entitled to only $500.

Another shipper stated in the “number/quantity of packages” column in the bill of lading only “1 X 40’”. However, in the “description” column, its bill of lading stated “STC 5000 units men’s jackets.” The cargo manifest indicated that 5,000 units or packages were being shipped at a total value of $23,750. Each jacket hanging in a plastic bag was considered in the industry and by U.S. Customs to be one unit.

Nevertheless, the Eleventh Circuit ruled that the carrier was liable only for $500 since the “number of packages” column stated only “1 X 40’”, thus evidencing the intent of both parties to treat the entire container as the package. The court held that the bill of lading must state in the “number of packages” column on the bill of lading the number and type of packaging that the owner desires to be subject to the $500 per package limitation.

Cargo owners must also be alert for individual carriers’ attempt to apply their own definition of a package. For example, Consolidated Freightways (CF) Combined Transport Ocean Bill of Lading defined the term “container” as “. . . any container, flat, pallet, or other form of cargo carrying unit or equipment referred to on the face hereof or in or on which any goods may be unitized or otherwise packed or stored when received by the carrier for carriage hereunder or subsequent to such receipt.” Further, the bill of lading stated that “For purposes of this agreement, a ‘Container’ is considered to be a ‘Package.’”

These clauses clearly reflect CF’s attempt to limit its liability to $500 for the entire ocean container or unitized form utilized by the shipper (pallet), or to the units in which CF subsequently repackaged and shipped the cargo.