Incoterms Lesson: The Danger of Using Ex Works for Your Exports 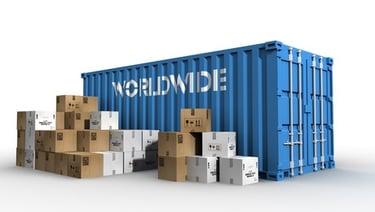 In my experience, many U.S. importers, exporters and bankers don’t understand Incoterms rules.

They often don’t understand the definitions or the risks and responsibilities of even their favorite sales terms that they’ve always used. They also don’t understand how Incoterms relate to payment terms.

One banker told me his bank doesn’t try to educate its customers on the correct use of Incoterms because no one uses them anyway.

What’s wrong with this picture? By educating customers on how to use Incoterms correctly, a bank can keep customers out of serious trouble while making its life easier as well.

The incorrect use of Incoterms results from misunderstanding the shipping terms existing in the United States. We have trade terms defined in the Uniform Commercial Code (UCC), which still remain valid for domestic trade and to the best of my knowledge, have never been translated into another language. Some American companies are opting out of the UCC and using Incoterms for domestic trade as well.

For international use, we have another set of terms: Incoterms 2020 (INternational COmmercial TERMS). If you aren't yet familiar with Incoterms, check out the article, The Beginner's Introduction to Incoterms.

The following are several true stories that illustrate the gaffes that can happen when Incoterms are used without properly thinking through the ramifications.

Exporters naturally gravitate to the Incoterm, Ex Works, because they think it’s the easiest path with the least risk. After all, what can be easier than saying to the buyer, "The goods are at my back (or front) door, come and get them?"

A Colorado company received a large order from an overseas buyer. Since the company was eager to accept this large order, it offered a steep discount on the Ex Works price quote. The buyer quickly agreed, but soon after delivery the exporter found these goods selling at discounted prices in a chain of U.S. retail stores, which was sabotaging their own sales.

Unknown to the naïve exporter, the Ex Works term does not require the buyer to export the goods at all, and diversion becomes a real risk. They learned an expensive lesson. The company had to buy back their own under-priced merchandise off the shelves to avoid competing with their own domestic products.

Another exporter received a letter of credit with the anticipated price quote, Ex Works. However, the letter of credit required an on-board ocean bill of lading from Oakland, California, to be presented to the bank before it released the payment.

Think about the risks. What if the buyer never picks up the goods? What if the goods become damaged, lost or stolen in route to Oakland? Without the documents, the exporter could never collect payment on the letter of credit even though it met their responsibilities under the Ex Works quote.

This exporter’s credit manager asked me to conduct an in-house seminar on letters of credit. After agreeing, I asked, “Why do you need the training? Do you have a new staff?” He replied, “No, we want to avoid repeating a recent mistake.”

“What Incoterm did you agree to?” I asked.

“Your term of sale, was it Ex Works?”

Another exporter came into our bank with documents expecting to collect payment immediately on his letter of credit. After a quick check of the documents, we discovered he needed an on-board ocean bill of lading indicating shipment from an east coast port. Instead, he presented a waybill issued by a trucking company showing shipment from Denver.

Yes, he correctly fulfilled his responsibility defined by Ex Works but was alarmed to find the buyer’s freight forwarder could subvert his ability to collect payment on the letter of credit. What if the freight forwarder does not provide the ocean bill of lading before the credit expires?

Free On Board (FOB)

Another misused term is FOB. Americans have a great love affair with FOB. Our own UCC permits the use of FOB here, there and everywhere. However, Incoterms 2010 restricts the use of FOB to ocean shipments only.

Remarkably, I continue to see letters of credit using the term FOB Denver, Colorado. Even with a 100-mile view from our highest mountains, I have yet to see an ocean vessel in Colorado!

While exporters may have the correct documents that comply with the letter of credit, how will they defend their actions in case of a dispute? Certainly not by relying on the definition for FOB found in Incoterms!

In addition, other Incoterms can cause problems if not understood. International traders and their bankers must understand their responsibilities and use the correct Incoterm that dovetails correctly with the terms and conditions of letters of credit or other agreed payments.

Frank Reynolds of International Projects, Inc., has written an insightful book, Incoterms for Americans, which I highly recommend. With a European perspective, the Incoterms read well but are not as easily understood by Americans. His book helps to view the terms from an American perspective and points out the pitfalls if used incorrectly.

International Business Training offers a half-day seminar and webinar on the meaning and purpose of each of the Incoterms—Incoterms 2020 Rules.

This article was first published in August 2015 and has been updated to include current formatting and links.