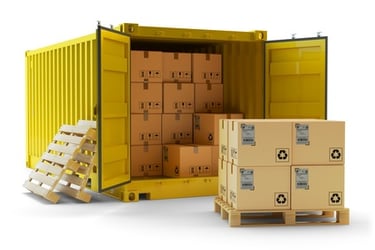 How do you prove you own your car? You prove ownership with an official looking document called the title.

How do you prove you own a shipment of goods? Well, it’s a title of sorts, but it’s called a bill of lading.

The bill of lading (BoL or B/L) always signifies or declares the shipment’s ultimate owner (consignee).

From a legal viewpoint, a bill of lading has three functions:

3. It’s a contract for delivery.

Negotiated versus Consigned Bill of Lading

A technique often used for certain modes of shipping requires the shipper to issue a negotiated bill of lading. In this case, the shipper designates the shipment with "to order" instead of "consigned to."

Once endorsed, the B/L becomes negotiable, which you can then give to another party. Whoever holds the B/L is the owner of the goods, similar to the negotiability of a check. For instance, if someone writes a check to me, “Pay to the order of Roy Becker,” I can cash it, or I can endorse it to someone else.

In an extreme example of multiple endorsements, a bill of lading form issued for a barge of soybeans shipped from St. Paul to New Orleans. The document’s backside contained 35 endorsements. Each party undoubtedly marked it up a dollar or two along the way.

Unbelievably, of the 35 parties, only two saw the goods: the parties that loaded and unloaded the goods. If the other 33 parties didn’t see the goods, could they prove they owned the goods? Yes, because they possessed the title document, the B/L.

A negotiable bill of lading becomes especially valuable if the buyer pre-sold the shipment to a third party. The third party just buys the transferable B/L. With the document in hand, the buyer can prove ownership and surrender the bill of lading in exchange for the goods. This scenario saves the middleman the trouble or expense of handling the goods.

The bill of lading describes the shipment, but the carrier is responsible for the description’s accuracy. If the buyer chooses, they can have an independent party inspect the goods prior to shipping.

Finally, I’ll leave you with this concise and accurate bill of lading definition coined by a lawyer: “A document purporting to represent a shipment of goods.” It’s that simple.

This article was first published in February 2016 and has been updated to include current information, links and formatting.