Defining and Using a Manufacturer’s Affidavit 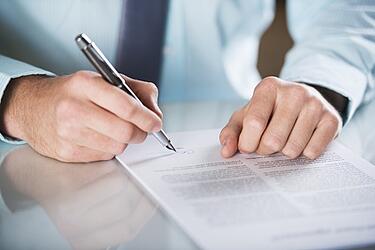 When exporting, firms create certain standard documents: a commercial invoice, a packing list, and a certificate of origin. International customers may request additional documents to satisfy their country’s import requirements, letters of credit, sales contracts, or purchase agreements. One of those additional documents is a Manufacturer’s Affidavit.

For example, Charles’ Dryer Company realized that they wanted to sell to their existing customers, but they were limited in their ability to do so since their professional dryers were lasting longer than anticipated. They were eager to sell their customers state-of-the-art units with new electronic controls.

To facilitate new sales, Charles’ Dryer Company agreed to remove units that were less than 10-years old and certified by an engineer as being in operating condition. They would sell these older units to its international customers in certain emerging markets.

Their customers were eager to purchase these used dryers and bought as many as the firm could supply. However, the Mexican customers were anxious for a Certificate of Origin. Since Charles’ Dryer Company had neither possession nor control of the dryers in the interim, they could not provide a certificate. Instead, they offered their customers a Manufacturer’s Affidavit.

3. A Manufacturer’s Affidavit may be requested by the buyer if payment occurs prior to shipment but not prior to production.

Once production is complete, the seller confirms the order is ready to ship by preparing a Manufacturer’s Affidavit. It will describe the goods and the state the goods have been produced in accordance with the contract. Upon receipt of the certificate, the buyer forwards payment and shipping instructions to the seller.

This usage requires a trusting and long-term relationship between the buyer and seller.

4. A Manufacturer’s Affidavit may be required by the buyer’s country to verify the origin of the goods and the name and address of the producer.

Exporters have a number of reliable resources for finding more information about documentary requirements including freight forwarders, the U.S. Commercial Service, or the foreign government’s U.S. consulate. In addition, you can download A Beginner's Guide to Export Forms from the Shipping Solutions website.

U.S. exporters are often surprised that they must follow U.S. Customs and Border Protection’s (CBP) requirements for the return of goods from their international customers.

"It should be simple," they often say. "The customer is just sending back something they don’t need, or the product must be repaired."

Because CBP is required to protect commerce of the United States (and much more), they want written proof that shipments being imported into the U.S. qualify for duty-free status along with the proper classification number.

That’s where a Manufacturer’s Affidavit comes in. Also known as a Declaration for Free Entry of Returned American Products, importers use it to verify that commodities valued over $2,500 are of U.S. origin, they have not been altered outside of the U.S., and they can enter the country duty-free under Harmonized Tariff Schedule Numbers 9801.00.10 or 9802.00.20.

CBP gives importers specific instructions for preparing the supporting documentation in the Code of Federal Regulations, 19 CFR Part 10.1. However, the instructions can be difficult to read and apply in day-to-day business transactions. That’s why a U.S. Customs Broker is often called upon by importers to help prepare and submit the appropriate documentation.

Upon reading the regulations, you will find the documentary requirements include a sample Manufacturer’s Affidavit to use if the value of the goods is greater than $2,500. This declaration can be made by the owner, importer, consignee or agent of the importer who has knowledge of the facts regarding the claim for free entry.

CBP may require additional supporting documentation if, for example, the value of the returned merchandise exceeds $2,500 and the goods aren’t clearly marked with the name and address of the U.S. manufacturer. The CBP Port Director may require other documentation or evidence to substantiate the claim for duty-free treatment, including:

CBP takes care to provide other options in the regulations for unique situations. The following points were excerpted from the regulations. Before using these options, please read CBP’s specific requirements for each situation:

There are two additional documents required by CBP when U.S. goods are returned; they include the Foreign Shipper’s Declaration and the Importers Declaration.

If you are an exporter who is an “accidental importer,” develop a strategy with your import Customs Broker covering such items as:

If your firm appropriately uses the Manufacturer’s Affidavit, you can save your firm money!

This blog post combines two articles, which were first published in January and February 2003, that have been updated to include current information and web links.