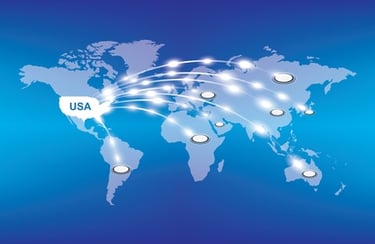 As I mentioned in my last blog post, I’m chronicling my journey learning export documentation and compliance in my new role as Customer Satisfaction Specialist at Shipping Solutions. As part of that journey, I recently attended the Essentials of U.S. Export Controls seminar, cosponsored by the Minnesota Trade Office and the United States Department of Commerce, Bureau of Industry and Security (BIS).

I had trouble finding the place, so I was a bit late. Luckily, the team running the seminar was helpful, and I was soon able to check in, grab a nametag, and take a seat.

The BIS representatives walked us through the Export Administration Regulations (EAR). These are a series of regulations placed on dual-use items—that is, items that have a conventional, civilian use but that also have the potential to be used in or as weapons of violence.

Dual-use items are assigned an Export Control Classification Number (ECCN). An ECCN is structured as follows: one digit followed by a letter followed by three digits. The first digit represents the item category. The letter represents the product group. The last three digits represent the type of control placed on the item.

These items are listed by ECCN in an organized fashion on the Commerce Control List (CCL). The EAR can be found in the Code of Federal Regulations 15 CFR 730-774 (Part 774 is the CCL), which can be accessed on the BIS website.

The BIS representatives described the process of checking whether a license is required by seeing if an item is on the CCL and then viewing the Commerce Country Chart (Supplement No. 1 to Part 738) and determining whether or not there is an “X” in the box for that particular type of control for that particular country. If there is, the next step is to check if it has any possible license exceptions. If not, one must apply for a license before exporting the good.

Items that are not specifically listed on the CCL, yet are still subject to the EAR, are designated as EAR99. EAR99 replaces an ECCN in these cases, and the license exception NLR (No License Required) is used.

Special Agent Perry Davis of the Office of Export Enforcement (OEE) and Special Agent Dean Scheidler of the Federal Bureau of Investigation (FBI) both emphasized the role that individuals within companies play in helping to deter acts of violence and terrorism. Just as the populace relies on these representatives in our government to think about our well-being and take care of us, those of us involved in exporting are relied upon to do our due diligence by researching companies (and individuals) we may potentially do business with and reporting anything suspicious (so-called red flags) to the relevant authorities.

The special agents described a few real-life examples of what happens when companies fail to comply with U.S. trade regulations. The example that stuck with me was a case involving electronic switches. These switches were exported from the U.S. to Singapore. However, a couple of Singapore nationals then re-exported the switches to Iraq, where they were utilized by terrorists as a component in improvised explosive devices (IEDs).

For more examples of these types of export violations,
download the free BIS publication, Don't Let This Happen to You!

Who’s ultimately liable? You might think liability falls on the Singapore nationals, but it actually falls on the company that originally exported the goods. As the OEE likes to say: “You can outsource responsibility, but you cannot outsource liability.” The exporting company was forced to pay fines and submit to punitive measures. But the real tragedy is the loss of life that occurred as a result of the IED’s. If the company had greater awareness and foresight, this may have been prevented.

Understanding My Role in Exporting

I like writing as a hobby, but as I began to realize that my writing involved the well-being of my company and my community as they are located in the context of the much larger, national government of the United States, I also began to take my writing a bit more seriously. It was a bit like that old movie, The Butterfly Effect. What if a lapse on my part or on the part of my company led to a bad situation? Simply making a careless mistake as a brand-new employee, at the time, seemed like no big deal. But I’m beginning to see that we really are all connected, and that we have to look out for one another if we are to survive and flourish.

I had some good conversations with other participants at the seminar. I couldn’t help but feel underprepared, like I hadn’t done my homework before school that morning. Maybe it was just the fact that I was late to the presentation that threw me off. I probably would have felt even better had I been able to attend the whole seminar. Regardless, I was highly satisfied with the information and guidance I received.

The presentation changed the way I thought about business. I started to see myself as not just a person at my desk at work, but as a human being interacting with other human beings, working together to try and make progress real, to protect what’s right, and to (if possible) have some fun while we’re at it.