Trade Agreements—FTAs, TPAs, Unilateral, Bilateral, Multilateral: How Do They Differ?

Trade Agreements (TAs) are agreements between two or more counties, where the governments have agreed on certain rules and obligations that must be followed in order for a company to claim preferential treatment. Preferential treatment is the term used for the elimination or reduction of duties paid on qualifying goods.

The U.S. currently has 11 Free Trade Agreements (FTAs) and three Trade Promotion Agreements (TPAs). Both FTAs and TPAs are trade agreements, but FTAs provide extensive reduction or elimination of tariffs on almost all traded goods, while TPAs are limited in scope and depth of tariff reduction between the customs territories.

The 14 agreements that the U.S. currently has in place are with the the following 20 countries:

There are three different types of trade agreements:

Some of the differences between trade agreements to consider include:

Are there drawback restrictions?

Drawback is the refund of certain duties, internal revenue taxes and certain fees collected upon the importation of goods and refunded when the merchandise is later exported or destroyed. Restrictions vary between TAs, and some do not have any restrictions.

USMCA uses the Transaction Value or Net Cost Methods. Others use the Build-Up, Build-Down and Net Cost Methods, or materials plus direct cost of processing must at least equal a percentage of appraised value method.

These methods calculate the percentage of originating content of the final goods when a TA rule specifies that RVC must be used to qualify goods. It is totally the manufacturer’s choice which method is used as specified for each TA if there is more than one method. This can be beneficial, because a good may not qualify by one method but could qualify by using another. This will be explained further in my next article: “How to Determine Regional Value Content.”

Can you make a reconciliation claim?

Sometimes a TA certificate or declaration is not available at the time of import for certain reasons. For USMCA, Chile FTA, CAFTA-DR, Colombia TPA, Korea FTA, Oman FTA, Panama TPA and Peru TPA, an importer can submit the certificate at a later date and a reconciliation is filed to provide the final and correct information. The reconciliation claim is due within 12 months of the earliest entry import date.

Most FTAs and TPAs do not require a formal or standard form to show proof of origin and will accept any documentation that a company chooses as long as certain data elements are included to prove goods qualify for preferential treatment. Companies may choose to use a certificate of origin or some other document such as the commercial invoice, as long as it contains all the data elements that are required for the FTA.

You can download sample FTA Certificates of Origin in PDF format here.

Most FTAs use specific letter codes to identify the Preference Criteria, but these also differ depending on which FTA you’re using. For example, you would not write Preference Criterion B on the AUSFTA form just because this was the letter criterion used for a USMCA shipment.

All preferential claims must be signed and dated, whether the claim is made in the form of a certificate such as a USMCA certificate or a declaration statement on the commercial invoice for ILFTA. 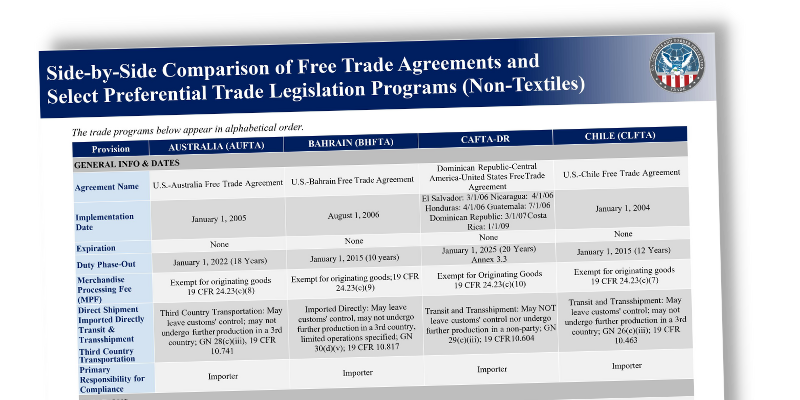 A side-by-side comparison of all of the U.S. trade agreements is available at the U.S. Customs and Border Protection website.