CUSMA Certificate of Origin in English

Download and print this PDF of the CUSMA Certification of Origin and help your importer claim preferential duty rates.

What is a CUSMA Certificate of Origin? 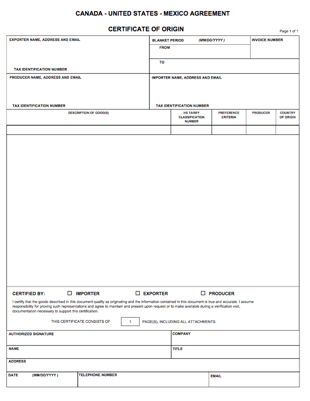 The Canada-United States-Mexico Agreement (CUSMA) entered into force on July 1, 2020, replacing NAFTA as the free trade agreement between the three countries. CUSMA is known as USMCA in the United States and T-MEC in Mexico. That’s because standard international protocol dictates that the name of the country in which a person resides should appear first.

Under the agreement, when exporting to the United States and Mexico you can claim a preferential duty rate for qualifying products. You must determine if your goods are exempt from tariffs and quotas under the CUSMA Rules of Origin.

Making the claim for preferential duty rates under CUSMA is the responsibility of the importer. But, the producer or exporter of the goods is often the party that completes the CUSMA Certificate of Origin because they are the one most likely to know whether or not the goods qualify.

The new agreement does not require a specific format for proof of origin, but it does require that very specific data elements are included to claim preference.

A certificate is not required for imports valued at $2,500 or less—as long as they aren’t part of a larger shipment broken up into smaller segments in an attempt to evade laws or regulations. A Certificate of Origin can cover a single shipment or multiple shipments of the identical goods for up to 12 months.

Send a paper or electronic copy of the Certificate of Origin to the importer once it has been completed. All documentation of CUSMA claims should be kept by the importer making the claim and the party that completes the certificate for at least five years.

Reduce the time it takes to complete the CUSMA Certificate of Origin by up to 80%. Shipping Solutions export documentation software makes it easy to create more than two dozen standard export forms. Register now for a free demo. There's absolutely no obligation.